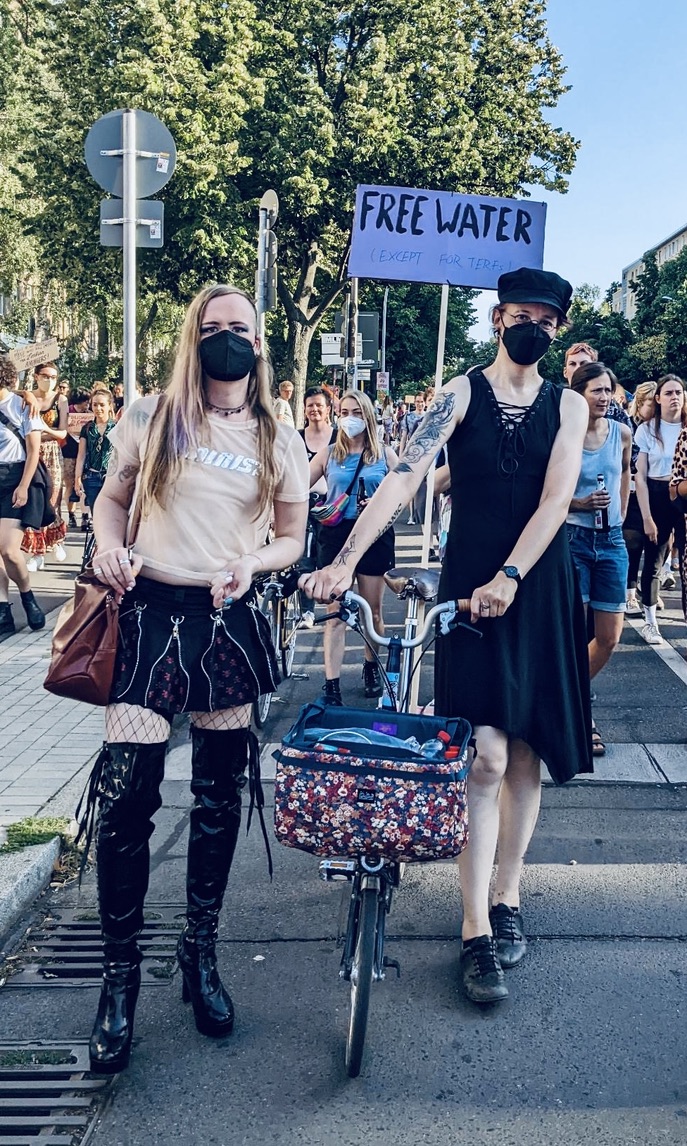 This week was Pride week in Berlin, which in Germany generally happens later than in most of the anglo-sphere, sometimes extending all the way into August in some German cities.

It was the second time I attended Dyke March after last year had been a transformative experience, leading to a major shift in how I see myself. This year I was a bit worried that the current political discourse around the planned self-ID law in Germany, which has many anti-trans groups coming out of the woodwork, would also become an issue at the march but the opposite was the case. Dyke March Berlin was even more visibly queer and more explicitly trans-inclusive. We saw trans, non-binary, and bisexual pride flags in significant numbers, among others and the general vibe was great. One more time it’s the Pride event that I feel most connected to and that means the most to me.

I wanted to try something more than just walking there so I made this plan to load up my Brompton with as much water as I reasonably could and to give out free bottles of water to people at the march. 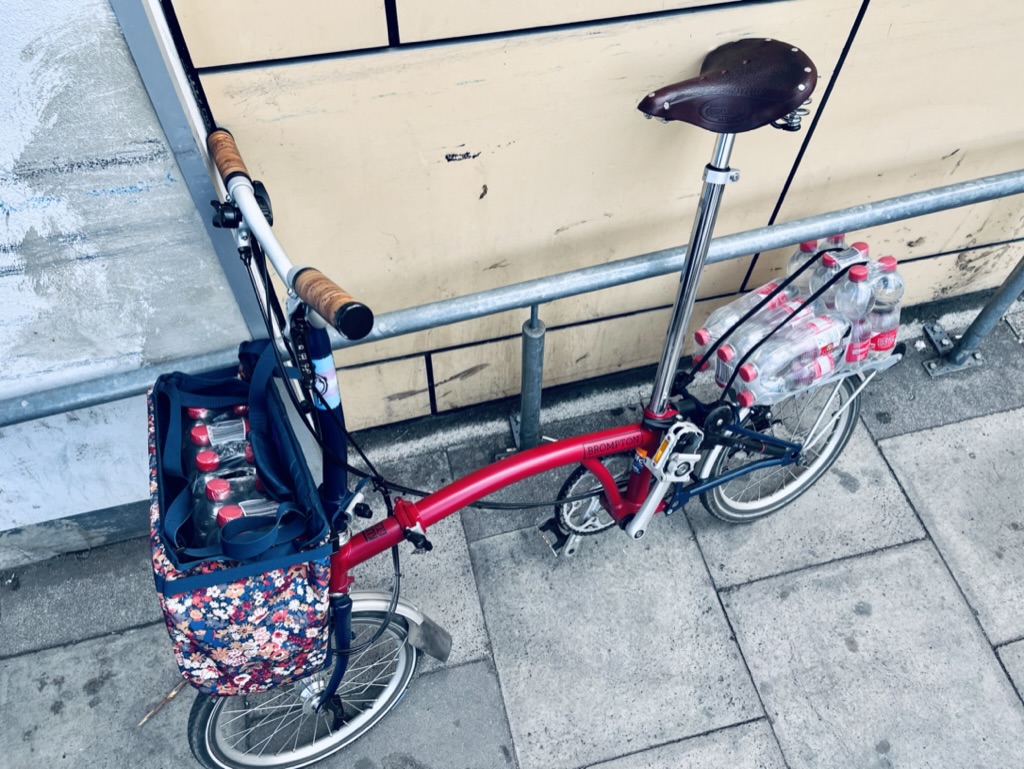 I wasn’t sure if this would work or if people would actually go for it, but they did. Within minutes after arriving someone asked me if they could have a bottle and by the time my little group left, I had run out of my stock. It felt amazing to participate in a more active way and also to see how happy and grateful people were for some thing as wimple as some water on a hot day.

Turns out, a lot of these lesbians were thirsty. 😏

Before and around Dyke March I also spent the week on a series of dates with incredible people, and having truly eye opening experiences with them. I’m still processing a lot of it but I think what I learned about myself will be the topic of some later writing in more detail. Spoilers: it’s kinky and I’m much more of a switch than I thought.

This has truly been one of the most amazing weeks of my life and I’m still riding a huge emotional high after all of it.

I was thinking of a video project that I would love to do but probably can’t. I have picked up LTI by Victor Klemperer again a couple of time lately and I think it’s a very relevant book today. To make it more easily accessible to more people I would like to read it on camera, as a series on Youtube probably. But since it’s not yet in the public domain in Germany (not until 2030), that would involve getting the rights to do this and I don’t even know where to start with that kind of thing and I probably can’t afford the cost of it.

I still have the idea in my had to do something with reading literature in German. I will investigate further what to do with this.

My last employer (Shopify) finally managed to send me the shipping box for returning the company laptop and this whole process fails in ways that are so revealing, it’s almost funny. I had joined Shopify in February 2020, pre-pandemic. So I got handed a laptop in person on my first day at the office and left the original box there in a desk drawer. When everyone got sent home due to Covid in March, we literally grabbed what we could carry off our desks and headed home. Some of us came to the office one more time to collect a few personal items they had left there, but that was it. Now, the shipping process for that laptop assumes that I have the original box to put it in, and then put that box into the shipping box. That only makes sense for employees who have joined the company after the switch to remote work. Since a big company’s processes are usually designed with the majority of cases in mind, this tells me that most people who are going through the exit process are people who joined during the COVID-19 pandemic, which indicates a pretty quick churn rate.

I don’t know if this interpretation is accurate and I don’t have access to any current hiring or attrition numbers at Shopify but I think it’s a funny example for how something an benign as a shipping box can potentially provide some insight into what is otherwise pretty much a black box.

According to Twitter analytics, my tweets over the past 4 weeks have reached over a million people for the first time, and with quite a jump too. I don’t really know what to make of this number but the idea that a million people have read something I wrote is surreal.

Most of the impressions came in on several threads I wrote about the upcoming trans self-id law in Germany.

Aliens, Monstrous Motherhood, and Why I’m Childfree by Mainely Mandy. A video essay about her reasons to not have kids that goes to some very personal places and hit quite close to home for me. It’s a topic that I’m thinking about a lot too lately and where I have a lot to unpack as well. Also Aliens.

I watched a lot of Chocolate Cacao, a YouTube channel about making very good looking pastries, usually heavy on chocolate. It’s great to fall asleep to.

Mia Mulder’s latest essay Detransition, Gender was excellent. It’s a sometimes contentious topic in trans discourse and did a great job looking at it from a variety of angles. 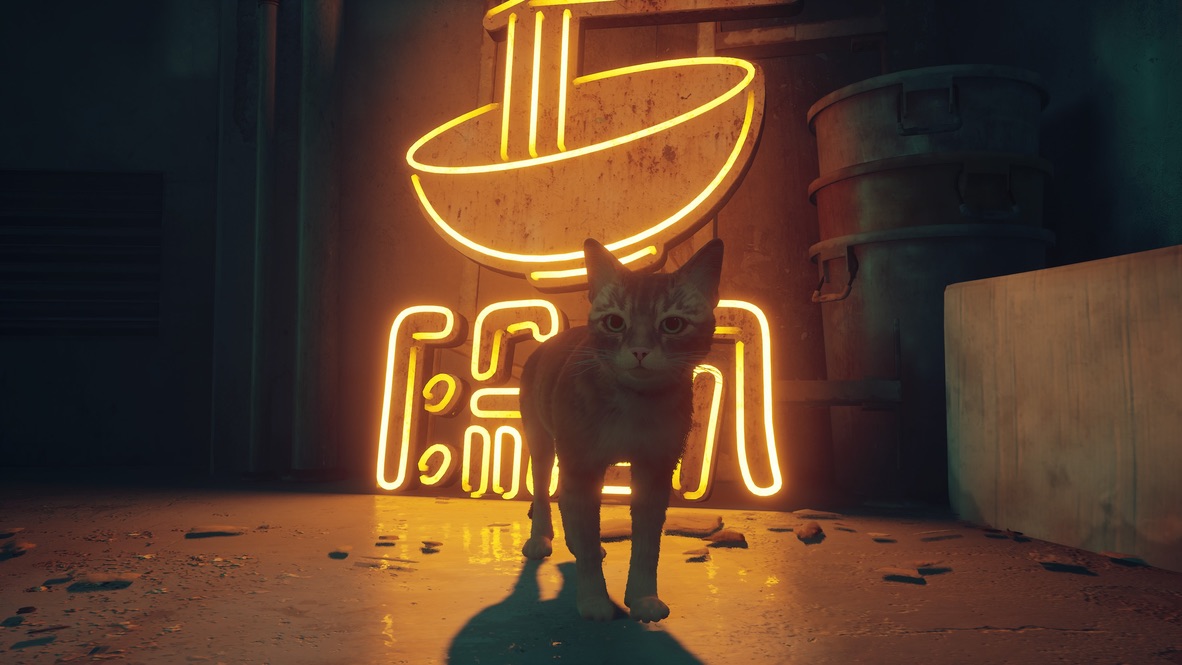 Stray came out ealier this week and so far it’s all I wanted it to be. It’s adorable, mysterious, and a little spooky. I haven’t finished it yet but I think I can already recommend it.

Polly Scattergood has released a limited signed vinyl edition of her debut album “Polly Scattergood” which is an album that means a lot to me. I still remember hearing a few songs from it via last.fm (remember that?) in 2009 and they carried me through a few really rough times in my life since then, especially “Poem Song”. I’m glad that I get to have a physical artifact of that, and to support one of my favorite artists, of course I ordered it immediately.

The JWST continues to capture the cosmic horrors of our universe is stunning beauty.