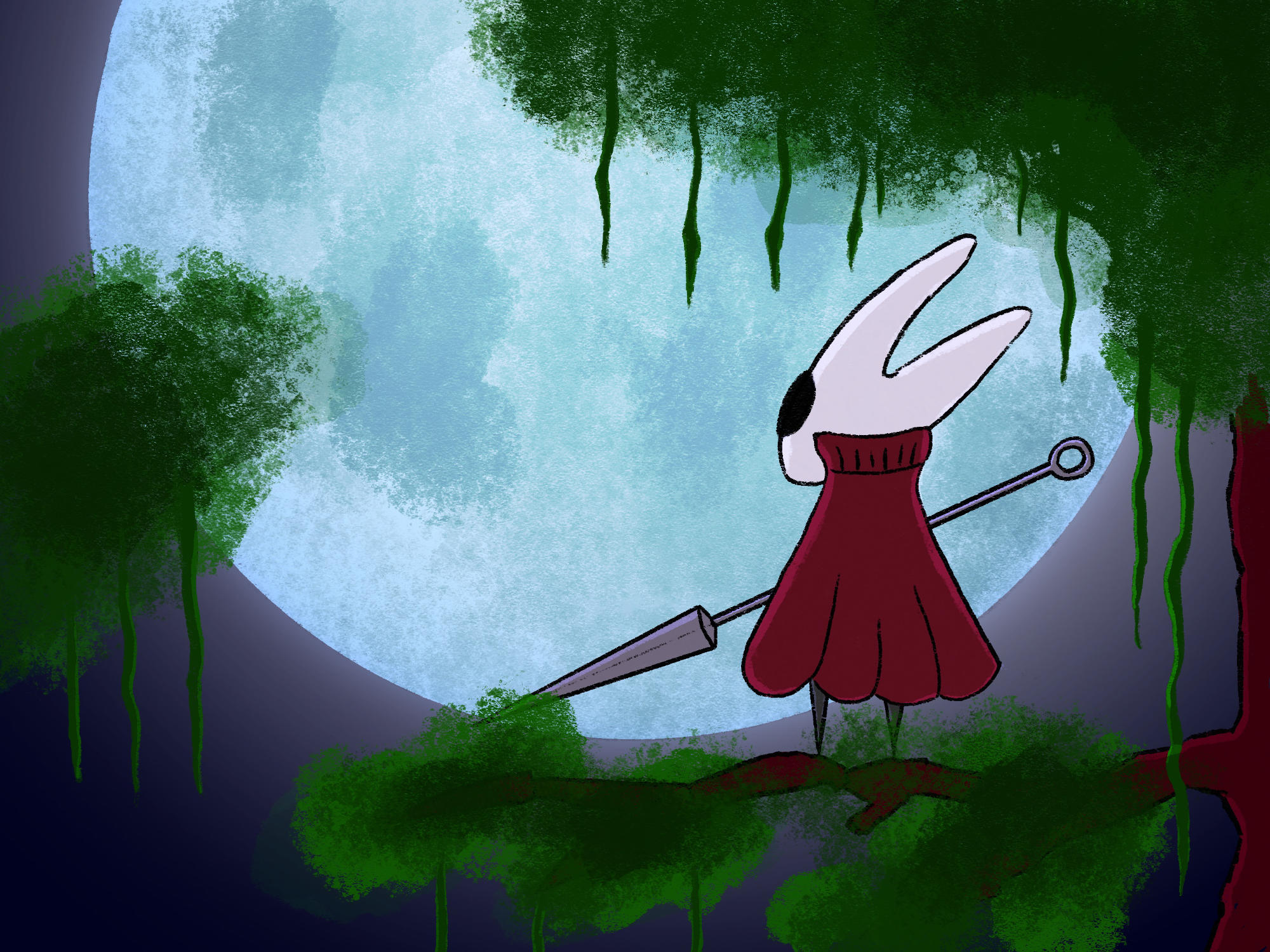 This week I gave Hollow Knight another try. I had played it before but never finished because I got stuck on a boss fight and didn’t have the patience back then. This time I started from scratch and even made it past the point where I stopped last time.

This game is still extremely beautiful and its melancholic mood is right up my alley. I even ended up drawing a little piece of fan-art about it. Also the soundtrack is really good.

A thing that’s been on my mind a lot this week was material needs and wishes. I realized that by now I don’t really feel a need for new things, outside of potential work-related equipment. The last major things I added to my flat were a bookshelf and I replaced my 10 year old TV. Since then, this place feels kind of finished. In terms of mobility I am more than happy with my one bicycle that gets me everywhere in Berlin, and my kitchen feels like it’s well equipped with every utensil I need.

Sure there are things that would be nice to have but they are more in the realm of nice gift-ideas and not things I would go out and get for myself.

It’s a strange feeling because ever since I started living by myself at age 16 there was almost always somethings missing, something to work towards, to save up money for, etc. And even later when money wasn’t tight anymore, it was still a very slow process to actually get the things I wanted. For example I didn’t have a proper wardrobe in my bedroom for the first three years that I lived in my current flat. Now, six years after moving in, the place feels complete and there’s no big todo item about it anymore. It’s very relaxing.

It also turns out that I don’t need a lot to feel comfortable and once that is reached it really feels odd to think about acquiring more stuff. That’s something I was worried about, that this feeling of being done would never come. But it did, and even at a fairly modest point, which feels very reassuring.

I saw this graphics demo on Twitter, showing off a very realistic rendering of Amsterdam in the new game Call of Duty: Modern Warfare 2. It’s very impressive as a technical achievement but I had visceral reaction to it. I just absolutely hate this.

I never cared much for realism in video games and the games I and up liking are often much more stylized or fantastical. And sure, it’s a question of taste and I can’t dismiss anyone who enjoys realistic looking games. I don’t know if it’s a case of the uncanny valley (even though that is specifically about human figures and nor architecture) but I don’t think it is. There’s something else going on in my emotional reaction to this demo.

Part of it is the awareness of how much labor surely went into creating this very unimaginative recreation of a real physical place and also the idea of placing a made-up war scenario in it for fun. I usually don’t have issue with violence in video games but the games I play are also very clearly fictional and not set in a realistic environment.

I’ll have to explore those feelings further, there’s probably more to unpack here. But for now, in a world where an entire advertising industry is trying to convince everyone to buy more stuff they don’t need, this feels like a success in mental resilience.

I usually would put podcast recommendations and such in the “links” section at the bottom but this week’s episode of Tech Won’t Save Us, “Don’t Fall for the Longtermism Sales Pitch w/ Émile Torres” is about a topic that’s important to me: the absolute nonsense ideology of “Longtermism”.

Every time I encounter some one taking this inhumane bullshit seriously I just want to scream.

I recommend the podcast episode, it explains it in details but here’s the gist: Longtermists are hardcore utilitarians but their’ goal is not to maximize the happiness of the existing population but that of a hypothetical population that will have colonized other planets and live in space in the far future, even artificial intelligences that according to them will at some point populate massive data-centers.

In order to ensure this future they are willing to de-prioritize all efforts that may help currently living people, like fixing climate change for example, and instead focus all resources on ensuring this fantasy future of theirs for which they have zero evidence that it’s even remotely possible.

It’s a way for super-rich people to justify dumping their stolen wealth onto toy projects, like Elon Musks obsession with a Mars colony, instead of giving it back to fix the damage they caused to steal their money in the first place.

This whole thing just makes me furious but it’s an ideology with a lot of capital and power behind it so not engaging with it is not really an option. This shit is coming towards us and we better be ready to critically face it.

Related to the theme of nonsense from super-wealthy people: How the World’s Wealthiest People Travel by Wendover Productions was an interesting but also infuriating look into the subculture of the worlds most wealthy people and how they spend they ill-gotten riches.

“Why You’re Not “Middle Class”” by Second Thought was a good summary of why the terminology of “lower/middle/upper” class is not very useful and instead “working” and “owning” class offer a more helpful analysis of economic struggles.

12tone has a deep analysis of the famous Cranberries song in the context of the 1990s in Northern Ireland: “Understanding Zombie”