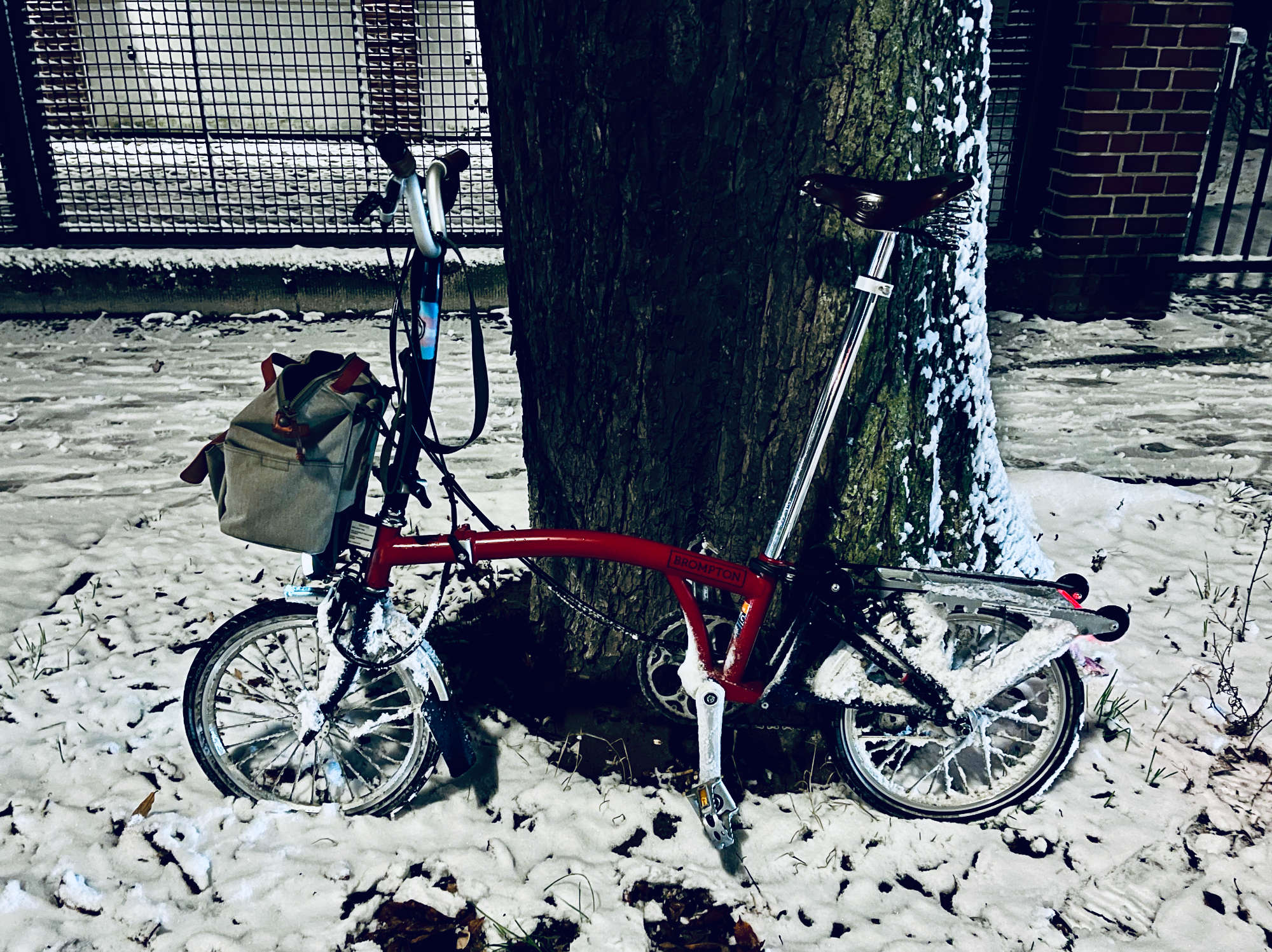 The cold is setting in

We haven’t has real winter in Berlin for years, it’s always been more like a prolonged fall with temperatures around 5°C and high humidity. This time it start off very differently. It’s been several days now with snow that doesn’t fully melt and it’s often slightly below 0°C. The speed of the temperature drop reminds me of my first winter in Berlin. I had just moved here and gotten rid of a lot of old clothes during the move so I didn’t have proper winter clothing like a warm coat and boots. Then in November the temperature dropped from +10°C to -10°C over night. I was utterly unprepared and of course the heating in my crappy flat stopped working that weekend too. I spent a few days in bed with several bottles of hot water under the blanket.

This time I’m prepared though. Well enough to even continue cycling. It’s been a while since I’ve done that on snow but after many years of doing so in the region where I grew up with much colder weather and much more snow, you don’t really un-learn it.

(Content Warning for deadly anti-queer violence for this section. Please skip if you’re not up for that right now)

It’s also been a week with a lot of emotional cold. As you may already know there has been an attack on a queer club in Colorado Springs with five people murdered.

I’ve heard this news and … felt nothing, and that really worries me. This attack was entirely foreseeable, queer folks on social media have warned about the dangers of stochastic terrorism for years and we were called “paranoid” for it. Now the exact thing we warned about has happened, again.

I don’t know if I’ve become numb to this kind of event, or if I’ve already gone through the grief and anger preemptively because of how inevitable these events are given the constant hatred spread about us by everyone from right wing extremists to mainstream media. Both possibilities are scary in their own way.

I don’t want to be numb in order to be resilient and I don’t want to go through the emotional distress of processing events that haven’t even happened but definitely will. I want to see actual action to prevent these things. I want to live in a world where I don’t have to assume such horrible things will happen.

I’ve been playing a lot of Hollow Knight this week again and this game is growing on me more and more. It really hits the same spot that the Dark Souls series did, that melancholic but somewhat hopeful vibe that resonates so well with me. 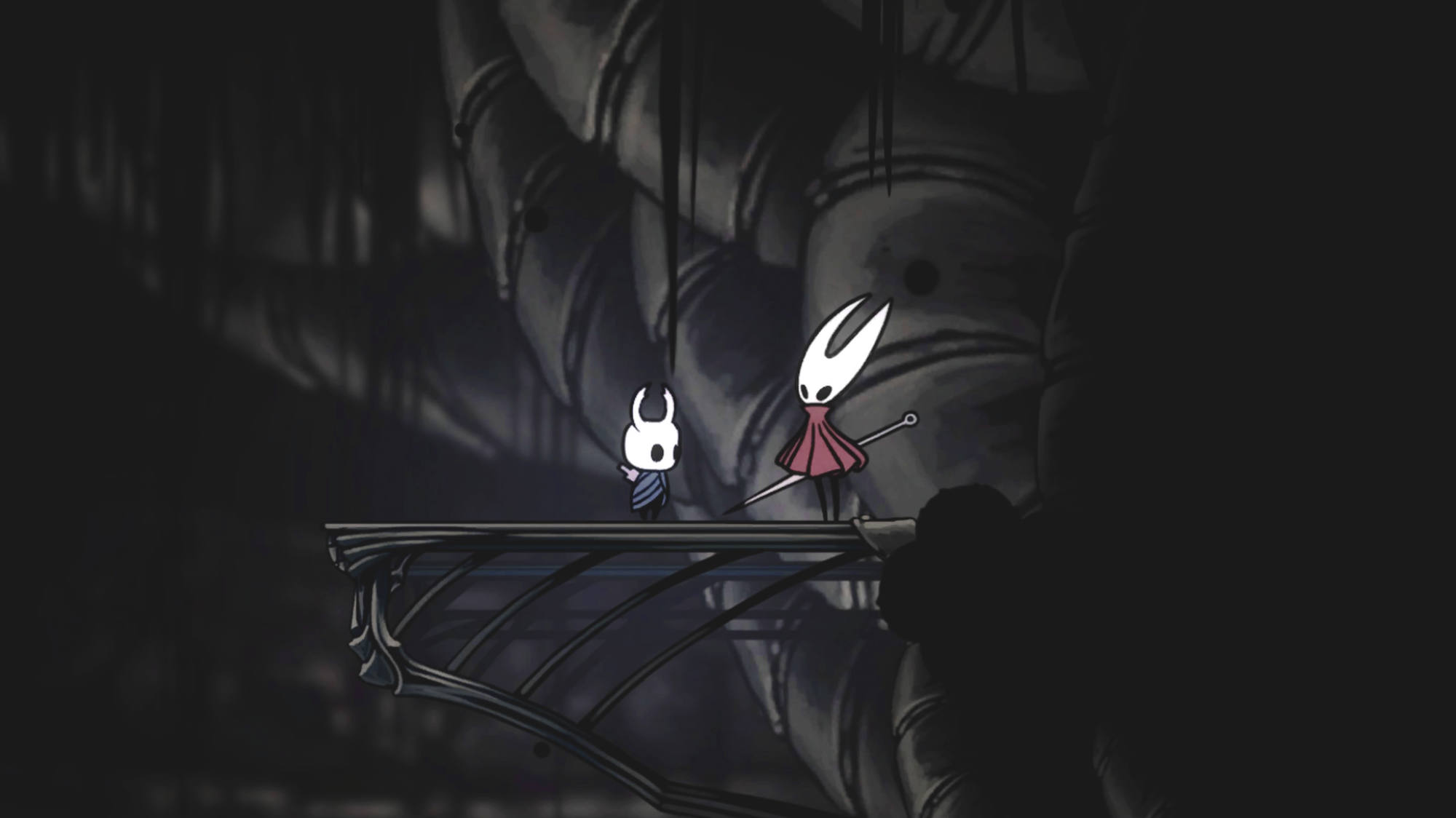 I’m getting closer to the end of the main story and I don’t want it to be over. I’ll probably spend more time in the DLC quests and finding more of the game’s secrets.

Twitter feels truly dead by now. I check in about once a day but the buzz is gone. Not even a poll I posted got any meaningful amount of votes which is probably an all-time first for me. I mostly see posts from “big” accounts now, often people who promote their other media like Youtube channels over Twitter, which is fine but used to be sprinkled in between the posts of all the people I followed who were posting their random interesting stuff. Also I started to get unsolicited notifications, sometimes for rather disturbing content from people I don’t even follow, and despite having all notification turned off except for replies and DMs from people I do follow. Big red flag.

I don’t see Twitter recovering from the massive damage Musk has done to it anytime soon, even if it where to change ownership again. So much institutional knowledge is very likely lost due to many senior staff members resigning or getting fired. I’ve seen this process play out on smaller scales in my own work and it’s just a matter of time before the platform starts seriously failing on a technical level. I wouldn’t be surprised if we see tweets disappearing, deleted content re-appearing, blocks not working, notifications not being delivered, etc. Maybe even major outages like SSL or DNS issues that could take the whole site down temporarily. Even of those parts of its infrastructure are likely automated, there’s always stuff that can and will go wrong and if nobody is around anymore to fixit quickly, it’ll become a noticeable problem. And I think it’s very likely that the people who left recently didn’t have a lot of incentive to leave behind comprehensive hand-over documentation for the components they worked on.

I’ve ventured deeper into the ActivityPub ecosystem (which Mastodon in a part of) and moved my book lists and reviews from Goodreads to BookWyrms, a social reading app running on ActivityPub. It’s quite the “aha” moment when you actually see how Mastodon accounts can follow, like, and reply to book reviews on an entirely different service.

In surprising news: the CEO of Tumblr has announced that they want to implement ActivityPub, after dealing with the huge influx of new users that is. This would be huge in making inter-operable social networks a thing. It would mean that Tumblr users could follow and interact with users of the various Fediverse services like Mastodon, Pixelfeed, Wyrms, etc.

On the other hand this could pose a major challenge for the network since it’s unclear how well moderated Tumblr is and some other instance operators are already discussing de-federating (basically cutting the connection to) some very large Mastodon instances because they pose a significant safety risk by being severely under-moderated.

I still think this can be an overall good thing, even if it’ll come with more growing pains.

Socialism for Absolute Beginners is a good for handing it to people who have either no idea what the term socialism really means or have severe misconceptions about it. It’s not anything new for people who have spend any meaningful amount of time learning about leftist political theory but helpful in educating others.

The lost infrastructure of social media is an interesting read about the history of social media and the web technologies that enabled it, how many of them were stripped away in the consolidation into major platforms, and why they are still valuable.

Very specific news that made me happy: Async trait functions are coming to Rust. Only in the nightly build for now but this is a big step towards stabilizing the feature and getting into the compiler proper. So far you had to use third party macros to do this and it came with significant limitations.