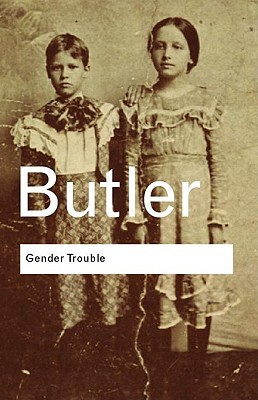 I wanted to read “Gender Trouble” because it is so widely considered a cornerstone work of contemporary feminist theory. Being released in 1990 makes it hardly contemporary from my present perspective (2018). Seeing it as the almost 30 year old work that it is helped me contextualise it a lot.

This book is often named as one, maybe even THE, foundational text of queer feminist theory. Since my own introduction into feminism happened much later and already in a queer context, the conclusions that Butler comes to are not really new. In that regard, the book did not provide me with a lot of new ideas. It did however serve as a history lesson for the state of feminist theory of the late 1980 and probably well into the 1990s.

Since a lot of the ideas that Butler criticises are still prevalent today, her work offers much needed arguments against them. Especially her deconstruction of Freudian psychoanalysis when thinking about the formation of gender identity in part two of the book was interesting to me. Her conclusions already made intuitive sense to me but it was very valuable to see them properly argued for.

She also exposes some of the very problematic ideas of “Radical Feminism”, e.g. that of Monique Wittig. Since proponents of those ideas are still very vocal, having a solid debunking of them at hand is very much appreciated.

One major criticism I would bring up is the almost complete lack of mention of transgender perspectives on gender. In many places it’s quite obvious that questions that remain open could be answered pretty easily by considering the existence and lived experiences of trans people. Butler addresses this shortcoming herself in her additional preface from 1999 which was included in my edition of the book. I would recommend reading an edition with this added preface as it is a very honest account of how the book might have been better, something I would like to see from more authors.

Despite being an academic text, I found its language to be rather accessible. Some other philosophical works I’ve read very needlessly unwieldy because of bloated language. Butler manages to keep that to a minimum, making the book much easier to read and understand.

Overall it was a good read. Not exactly what I had hoped for and maybe a little dated but still very much worth it. It should definitely be read within the context of its time, though.