Changing names and email addresses on various accounts is something very common for trans people after coming out. Some companies make it easier than others. Some make it impossible. Apple is almost in the last category, but not quite. There is hope.

When I created my personal Apple ID some time around 2010, I believe I created it with a new email address like deadname.weidauer@me.com since MobileMe was still a thing at the time and iCLoud wasn’t yet. Later I signed up for iCloud, which added another address deadname.weidauer@icloud.com.

In 2017 I came out as trans and changed my name. I registered a new domain for my website and to use for email too. My primary email address became esther@selfawaresoup.com. I added it to my Apple ID and set it as the primary one so that it becomes the actual ID and the others become what Apple calls “login aliases”. These are different from email aliases in your iCloud email wich adds some confusion.

When I tried to remove the two old addresses that were referencing my deadname, I ran into this:

This is how far I got at the time when I was in the process of changing my name legally in 2018/19.

The problem that remained was that every time I set up a new device for use with this account, one of the old login aliases would be set as the default for sending iMessages from. This is potentially dangerous because it could disclose my deadname to whoever I sent a message to from a new device until I manually change that setting again. Luckily I mostly use iMessage with people who already know and the issue got caught each time before anything bad happened. Still, I was always nervous about forgetting this during setup of a new device.

This Transgender Day of Remembrance, we honor those whose lives were tragically stolen by bigotry and hatred. It’s only through love, acceptance and education that we can build a future where everyone is safe to live their truth. 🔗 2020-11-20

I kind of snarkily send a reply:

Please let us change or remove the primary Apple-ID email address so we don’t run the risk of accidentally outing ourselves every time we send an iMessage from a new device. 🔗 2020-11-20

After John Siracusa retweeted this reply and the tweet got some buzz going I got motivated to try again and contacted Apple’s Support on Twitter via DM and described my problem in detail. They asked a few questions and scheduled a call with a Senior Support Advisor. We talked for about an hour a feew days later, they checked all sorts of details, confirmed that I’m actually the owner of the account and then escalated the issue to their engineering team. They told me it could take a few days. Today, on November 24th I checked my Apple ID account again out of curiosity and the old aliases were gone.

Now, my Apple ID shows no trace of these two aliases, iCloud email is disabled entirely (which was expected) and when set up an old iPhone again from scratch, only the correct email and my phone number show up in iMessage settings, as they should: 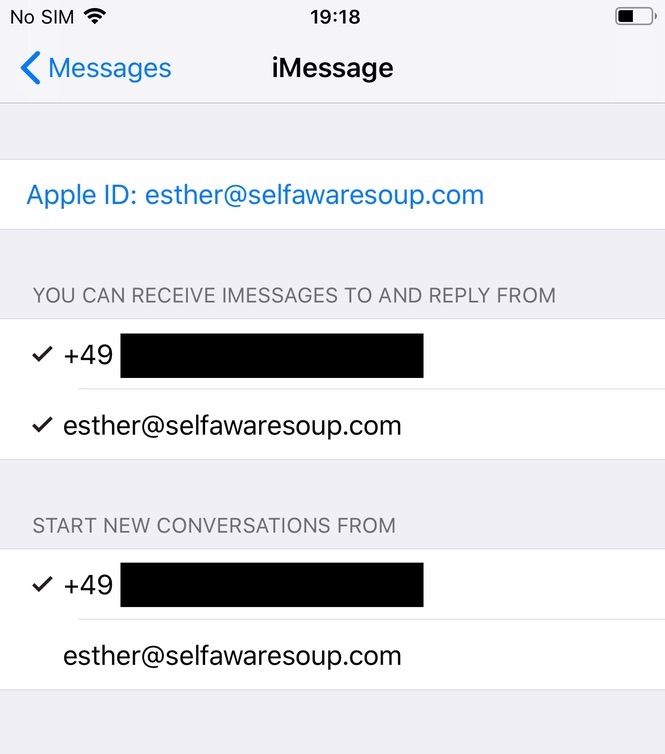 My working theory is that a support engineer at Apple needed to run an SQL statement on some database in order to remove these aliases, or something of that sort. This should of course be an option accessible to the user in the Apple ID settings. But it’s good to know that it is possible. Almost every trans person I know who uses Apple devices and/or services has this problem and creating a new Apple ID is usually not an option because all previous app and media purchases are tied to it.